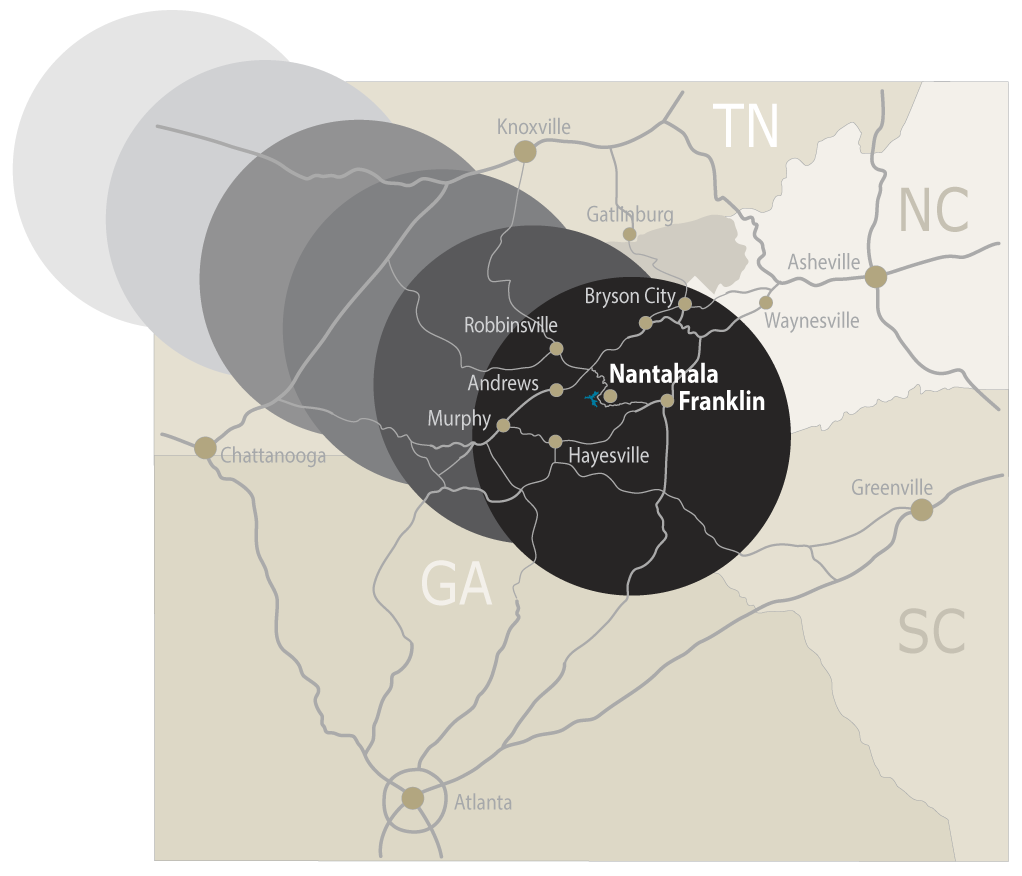 ‘Nantahala’ is a Cherokee word meaning ’land of the noonday sun’. But for 2-1/2 minutes on August 21, Nantahala will be the land of midday darkness thanks to the nation’s first total solar eclipse since the 1970s.

On that day, the moon will cast a 70-mile-wide shadow that will follow a southeasterly path across the country, from Oregon through South Carolina. And Nantahala sits squarely in that path of totality.

The entire event will take about three hours as the moon slowly passed across the face of the sun.

The partial eclipse will begin shortly after 1 pm in Nantahala. As the moon moves in front of the sun, it will first appear like a small ‘bite’ taken out of an apple. Gradually, the ‘bite’ will become larger and larger as daylight becomes dimmer and dimmer. As more of the sun is covered by the moon, the sun will take on a crescent shape that continues to get thinner until the sun is completely covered and turns black. This transition will take about an hour and a half.

At around three-quarters coverage, shadows will begin getting sharper and crescent-shaped, due to the sun’s 'shrinking' disc. Tree leaves will act like pinhole cameras projecting hundreds of crescent suns in their shadows.

The total eclipse will begin at 2:34 pm and last for two minutes and 36 seconds. During total darkness the temperature may drop 10 to 15 degrees, birds will stop singing, and stars will be visible in the daytime sky. After that, the process will be reversed as the parttial eclipse slowly wanes and sun becomes brighter. By 4 pm, Nantahala will have returned to normal.

Nantahala's 3000 foot elevation makes it an ideal place to experience the solar eclipse. And with the eclipse happening on a Monday, why not make it a long weekend in the Smokies? We have plenty of lodging, but make your reservations early. It promises to be a popular weekend.

Safe Viewing of the Eclipse

Protective glasses or filters MUST be used to view all partial eclipse phases.

However, during the few brief moments of total solar eclipse, it’s perfectly safe to view the darkened sun with your naked eyes. With the moon’s disk completely covering the sun, there are no harmful UV rays to damage your eyes. In fact, to fully experience the viewing of the corona ('crown'), viewers are encouraged to look at the sun without a filter during totality.

But the moment the first glint of a ray begins to appear, viewers must put their protective glasses or filters back on. Even the UV rays in the smallest beam of direct sunlight, while painless, can cause permanent damage to the eye. More info on eclipse-watching safety.

We recommend purchasing your protective eye wear before you leave home. Make sure the glasses are certified for solar viewing; sunglasses are not. There are many online sources, including: