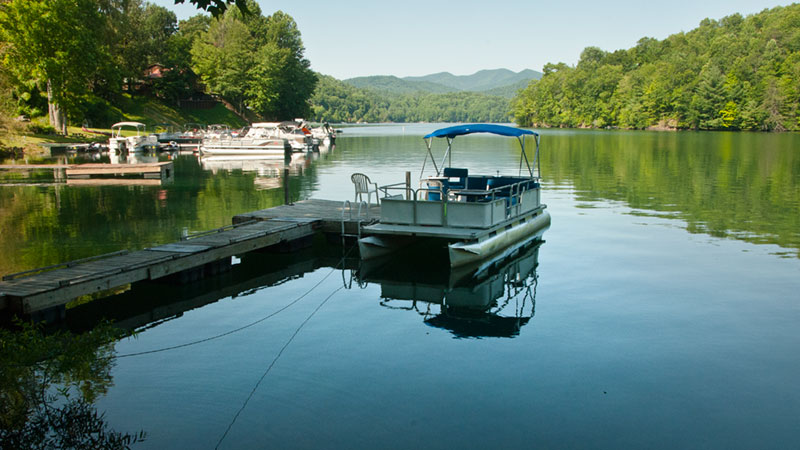 Nantahala Lake is located high above the Nantahala River Gorge at a 3,000-foot elevation - a pristine and serene lake with just 30 miles of shoreline. The lake is regulated and maintained by Duke Power Company. Many anglers enjoy fishing the Nantahala reservoir due to the low number of boaters and the breathtaking scenery. Fish in the lake include Walleye, Crappie, Sunfish, Trout, and Bass. And it's the only lake in the South with a population of freshwater Kokanee Salmon.

Nantahala's shoreline is dotted with private homes and cabins, yet much of the shoreline is managed by the US Forest Service and the North Carolina Wildlife Resources Commission protecting the lake from commercialization and preserving its beauty.

Nantahala is the South's only lake with freshwater Salmon

Kokanee Salmon are the landlocked version of the Pacific Sockeye salmon. Stocked in Nantahala Lake in the early 1960's as forage for the predator population of Walleye, Smallmouth and Largemouth Bass, the salmon have been naturally reproducing ever since. The average Kokanee Salmon across the country is 12" with a few lakes producing larger fish. Nantahala is one of those lakes. The average salmon in Nantahala is 18" with many fish over 20".

Jeff Smith’s (above) 4-pound, 1-ounce fish, caught from Nantahala Lake on June 11, 2014 is the state record for Kokanee Salmon.